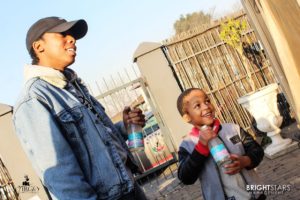 2018 is the centenary year of Nelson Mandela, a struggle hero and the nation’s first democratically elected president. To celebrate this great South African leader, an organisation going by the name South Africa as One was sponsored by Frava Drinks as they treated kids from Alexandra township, north of Joburg to games, food, and drinks on Mandela Day.

As One founder, Lerato Qwabe says they identified Mandela Day as the perfect opportunity to do something good as an organisation. “This country requires a lot more than doing good only on this particular day, there are numerous unfortunate communities and Alex is one I believe requires change,” she says. Lerato says this was done in order to put a smile on the kids’ faces and allow them to forget about situations at home.

Fraya brand manager, Keba Finger, also believes such days are vital in reminding people of the importance of giving back. “Lerato informed me about the event and requested I come on board with the hope I could contribute towards this great initiative,” he says. Keba says Fraya has a lot of new products from their coconut ice drink, drinking yogurts and milkshakes they brought for the kids, which they enjoyed. “We are all giving back in our special way,” he states.

Keba also says it was quite special seeing the excitement in the kids’ faces. “If we do not take care of the community and those who have less than we do, who is going to take care of them,” he asks?

Keba said the day was quite special because every now and then, kids require a proper meal and they’ve got to drink some great cooldrinks. “We could also motivate them to do better for themselves,” he concludes. 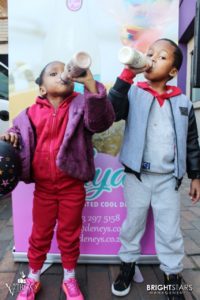 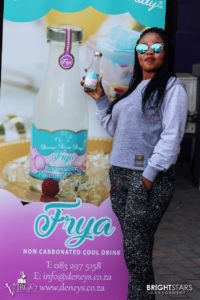 South Africa as One brand manager, Lesedi Kikine says the organisations welcomes book and school shoes donations. “The public can donate their time or learning materials, whether its teachers that want to dedicate their time by tutoring learners after schools or on weekends, they are welcome to volunteer,” she says. Lesedi concludes by stating that there will be proper security checks on volunteers for the safety of the children.By: Mokgadi Raboshakga